Posted on Thursday May 9th, 2013 by IVAN GABALDON 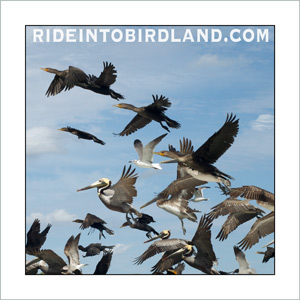 Our second day in Campeche did not start as early as birders’ days usually do. We had to wait for the remaining bad weather to lift, so we had a relaxed breakfast, then waited some more while Maria kindly made arrangements for our group’s boat trip. The motor boat would take us first along the shoreline of Isla Arena, then into a water inlet nearby, where we would try to navigate the narrow channels that stem off it and delve deeper into the mangrove ecosystem.

As the skies cleared up and the sun performed warming duties, birds became more active. Gulls, skimmers, cormorants and pelicans were everywhere. These are all, any birder would argue, “common birds” in this part of the world. But watching a Brown Pelican gliding effortlessly in such great style, so close to the water’s surface that its wingtips actually touch it, one realizes the word “common” doesn’t do justice to these amazing birds.

From where I stood on the beach, camera and monopod in hand, I could see interesting interactions between perched Bicrested Cormorants and a group of flying gulls. Close to me, near the water’s edge, gulls and terns did their usual thing, gathering in large groups, taking off and landing a few feet away, several species mixed together and sharing the space. 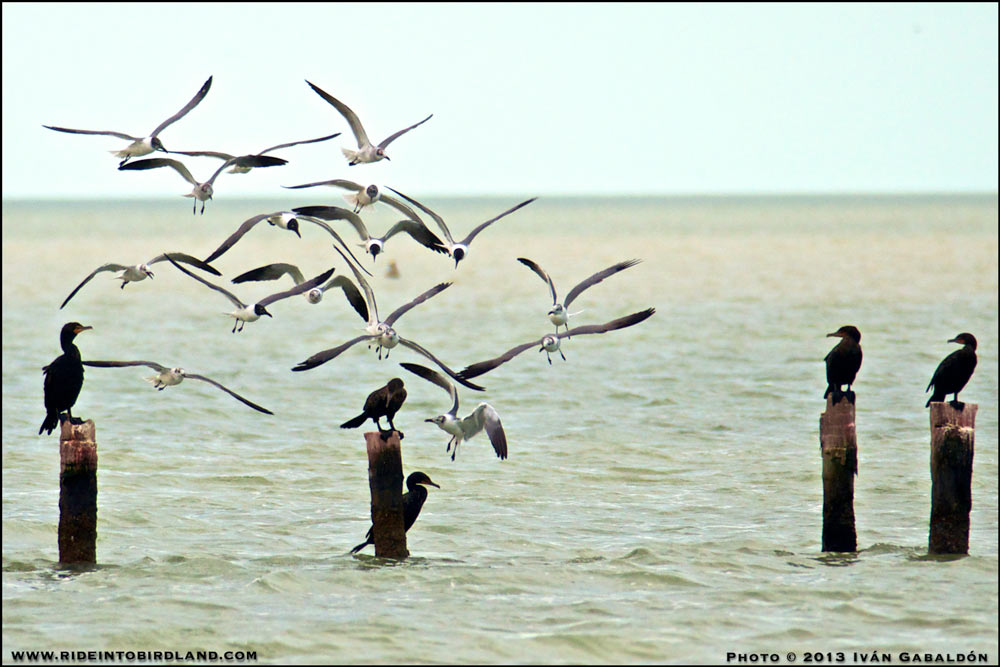 I know the perched birds are Double-crested Cormorants (Phalacrocorax auritus), but I give up on the “gull challenge”. Any gull and tern experts out there, please drop me a line if you can help, credit will be given. These birds often look alike, have many variations in plumage according to age and season, and to make matters more entertaining, species like to intermix. (Photo © Ivan Gabaldon). 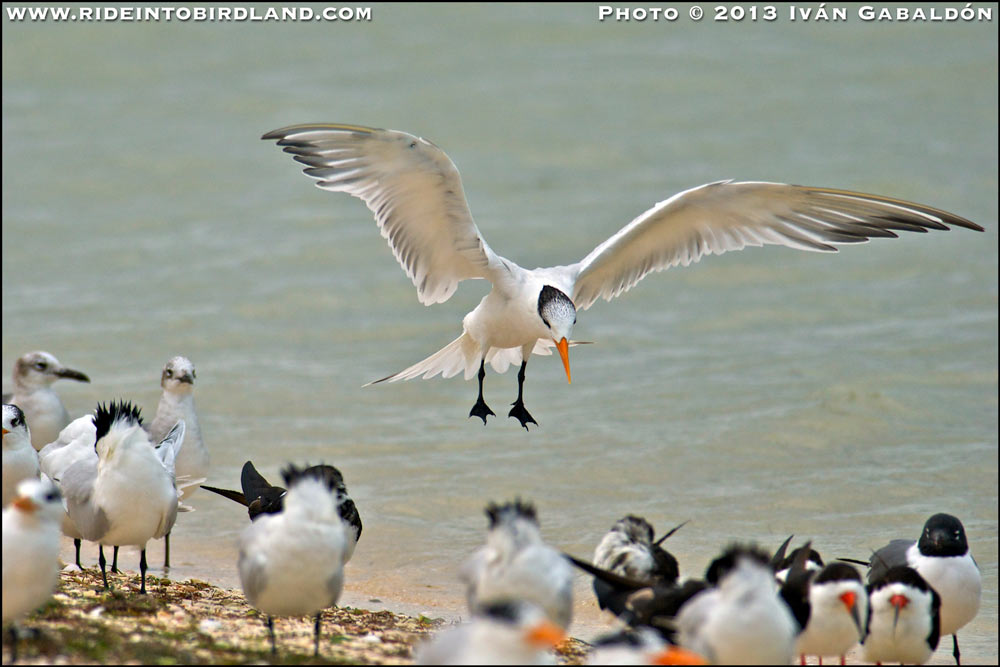 As far as I can surmise, the bird about to land should be a Royal Tern (Thalasseus maximus) in winter plumage. (Photo © Ivan Gabaldon). 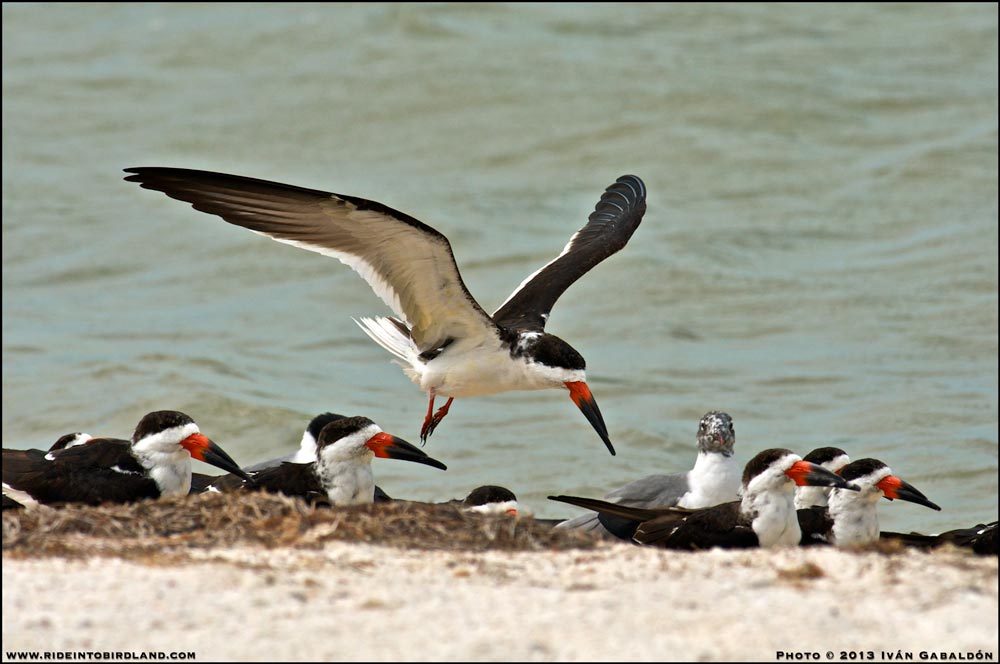 Any remaining bad weather had lifted by the time we boarded our boat and got going. In anticipation of the birds we expected to see, we headed towards the mangrove forest, closely followed by a friendly gull. As we motored along the shoreline we couldn’t help but notice a modern structure with a nicely trimmed garden and a monumental statue of an imposing man, waving goodbye: this is the “Museo a Pedro Infante”, inaugurated in 2012. A few days later, while on a birding outing with Joann Andrews and her son David (report coming soon!), I happened to mention this to her, and she commented that indeed Mr. Infante loved to spend time at Isla Arena. She knows firsthand: the famous Mexican singer and actor flew there many times as a passenger with Joann’s late husband, archaeologist celébre and airplane pilot Dr. E. Wyllys Andrews II, in his small Piper plane. “I wonder if there’s a picture of the two of them together?”, Joann asked. Since we didn’t have time to visit this time around, I couldn’t provide an answer, but I’ll make sure to check on my next visit. Among the objects in the museum’s exhibit is the Golden Globe Award earned by Mr. Infante in 1957 for his performance in the film TIZOC. It is known that Pedro Infante liked coming to Isla Arenas because he appreciated the people, its shoreline, and also the area’s many species of birds.

On the left, the monumental statue of Pedro Infante. On the right, our happy group: Cherie Pitillo, Jacqueline Aldana, María Andrade, and our friendly boatsman. (Photo © Ivan Gabaldon).

We finally got close to the edge of the mangrove, and bird sightings were plentiful. Below, pictures and few words: 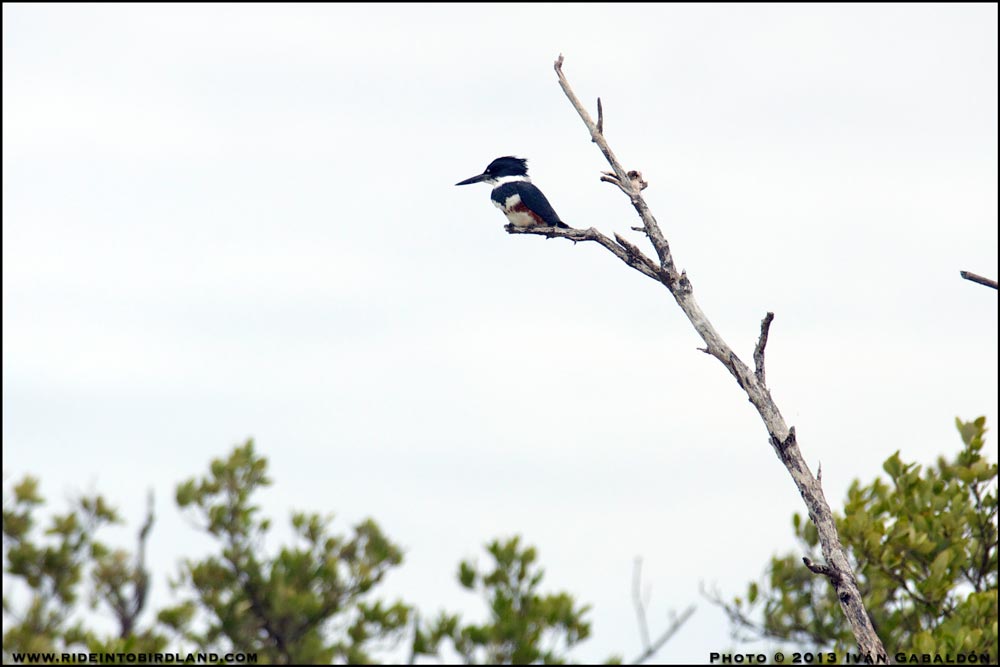 Hard as we tried, we couldn’t get much closer to this beautiful Belted Kingfisher (Ceryle alcyon). (Photo © Ivan Gabaldon). 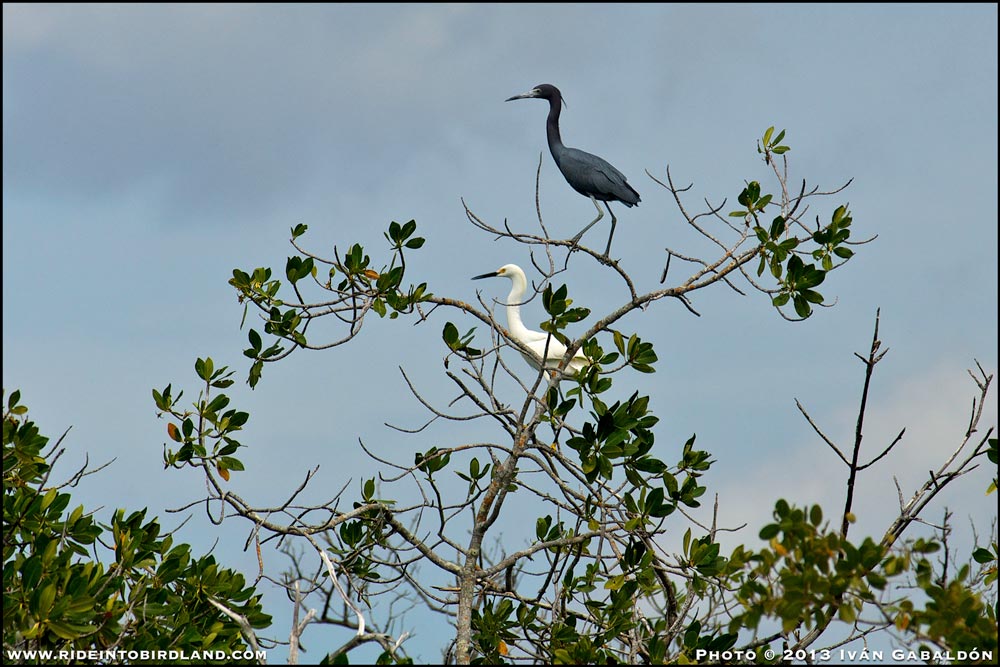 Please bear with me now, as I present four images of the same individual: a sequence of an Osprey (Pandion haliaetus), springing into flight. 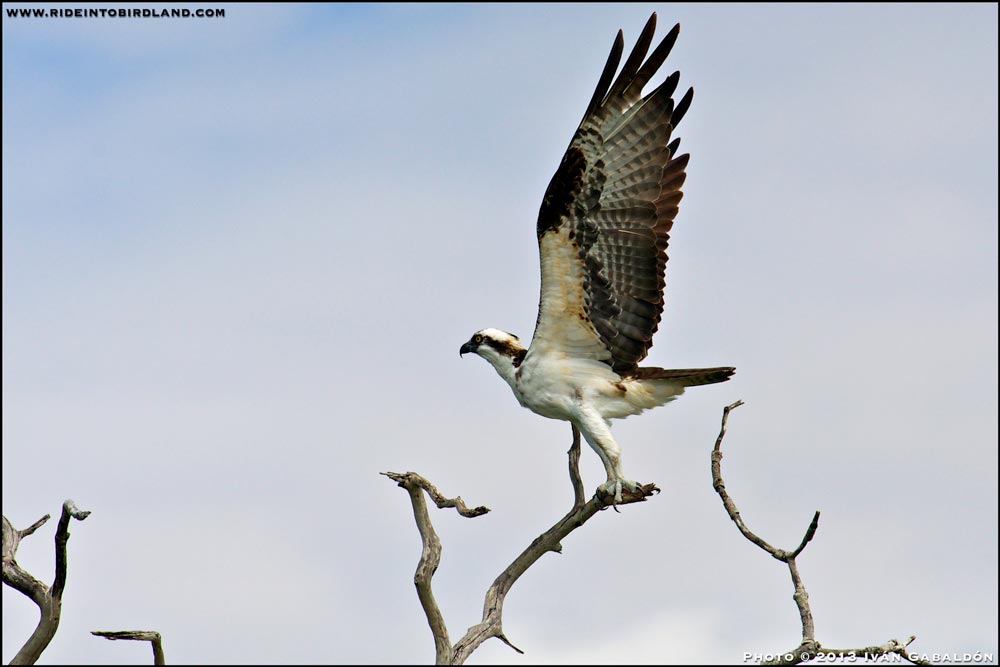 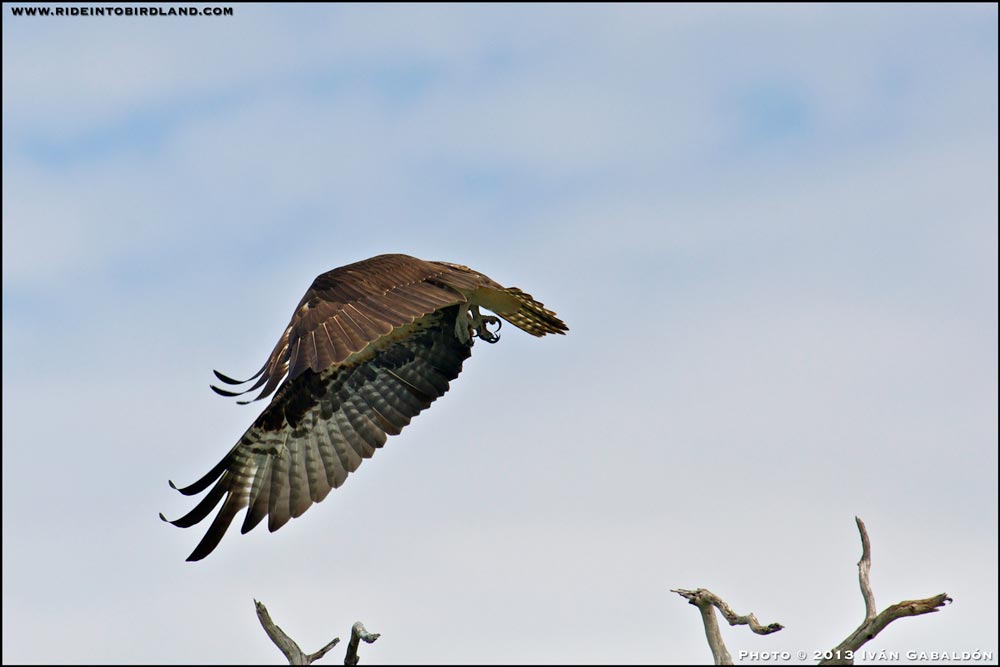 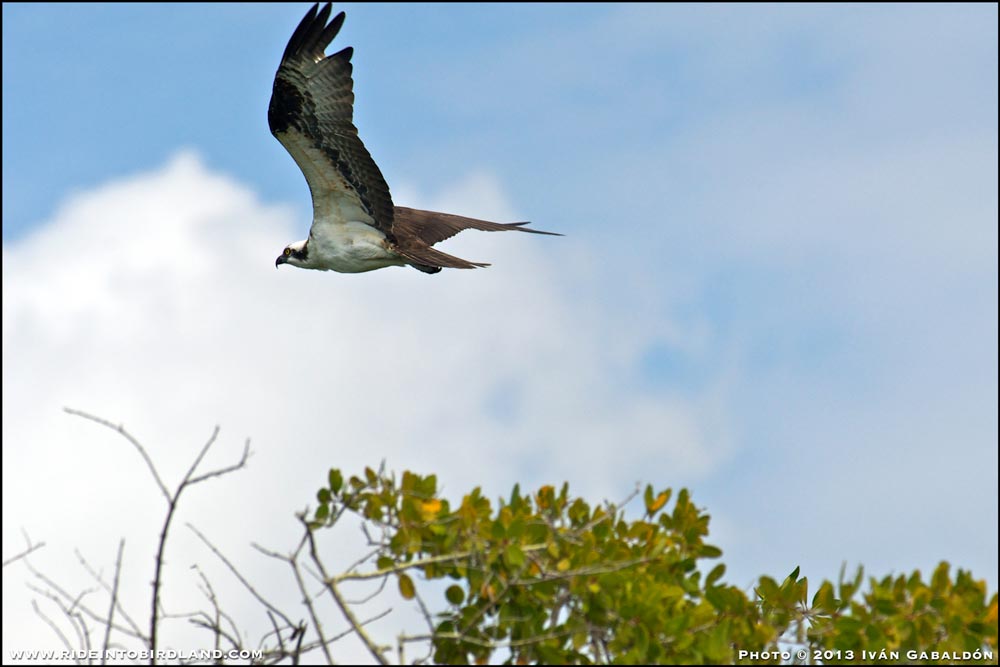 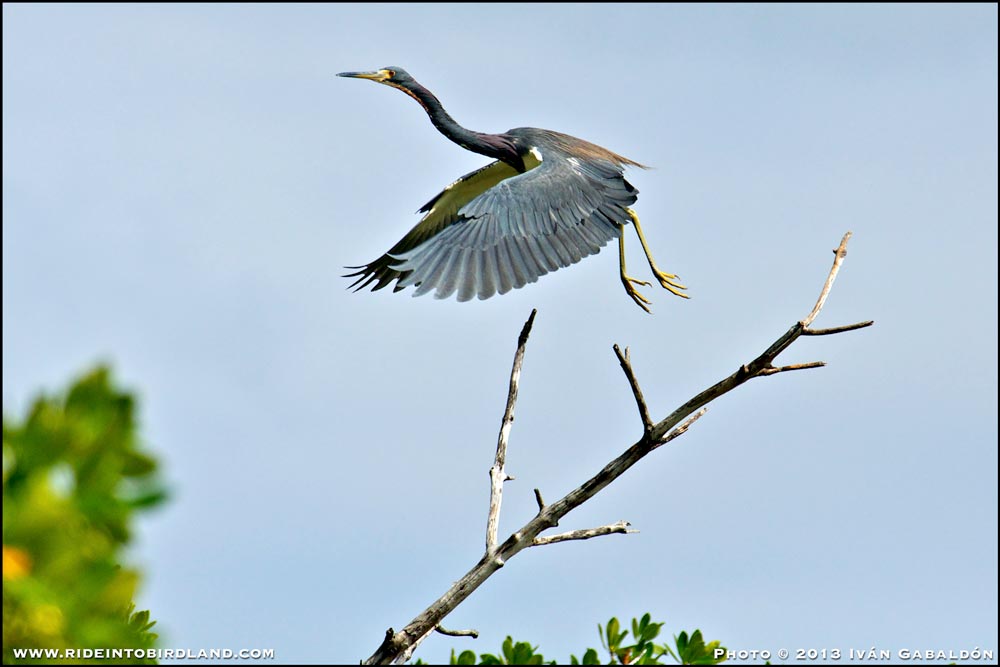 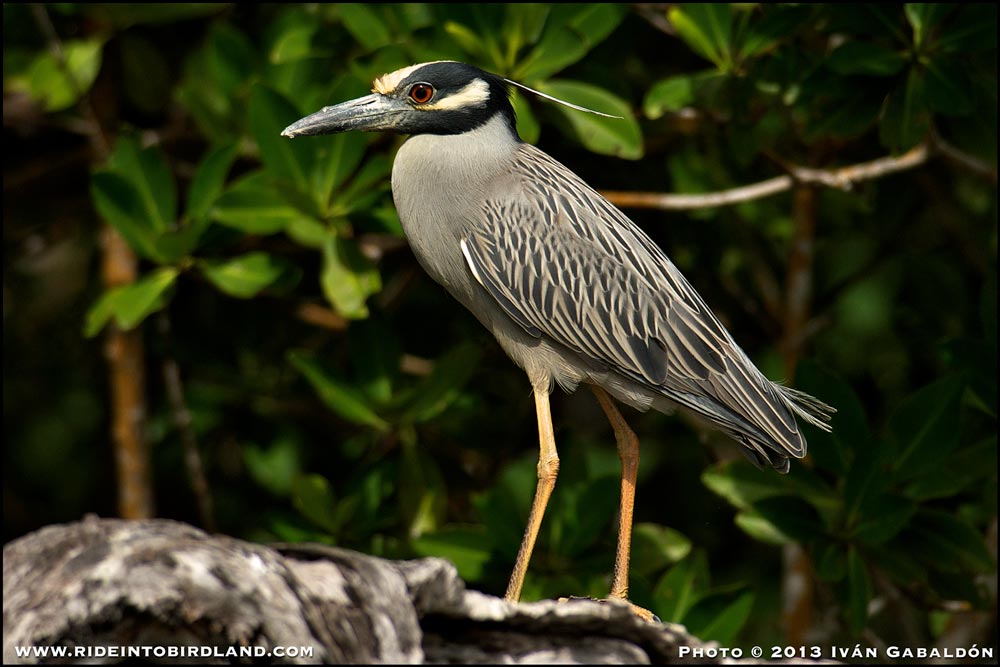 Not to be confused with a Snowy Egret, this juvenile Little Blue Heron (Egreta caerulea) has yet to molt into its blue feathery suit, but is easy to tell apart from the Snowy by its greenish legs and grayish bill. (Photo © Ivan Gabaldon). 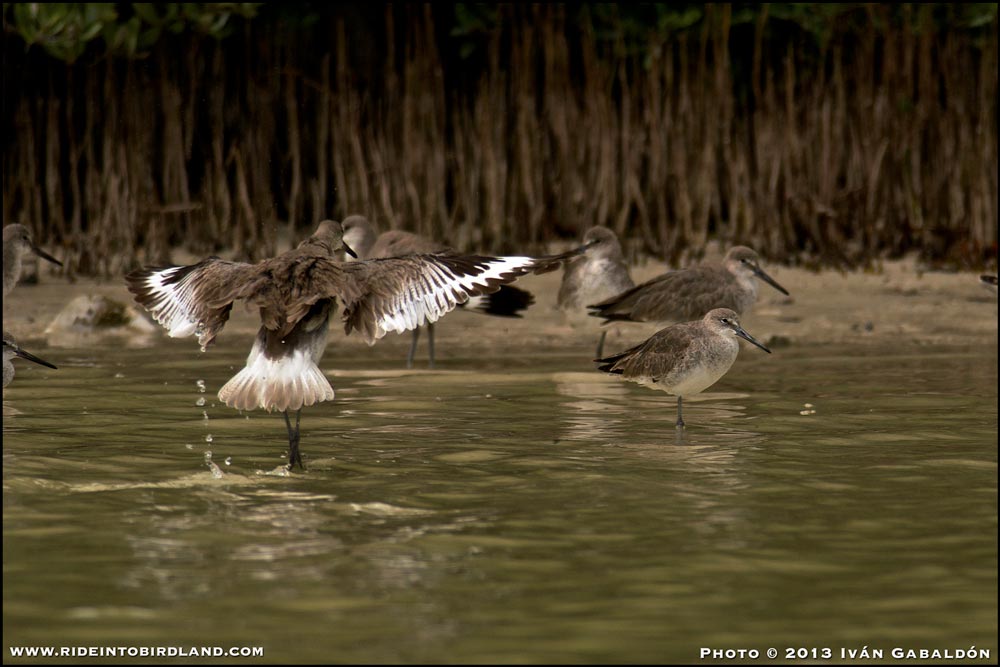 The images I have shown here are only a selection of what we saw. I was one of three photographers busy taking pictures and I’m sure my fellow travelers also captured quite a few worthy shots. Still, satisfying as the experience was, as the end of our boat ride approached we realized two things: first, in order to be able to travel further into the mangrove forest through the narrow channels, birders would be wise ask about high-tide times and plan the trip accordingly, as the boat’s ability to travel further inland is diminished at low tide. Also, it was undeniable that the outboard engine tended to scare birds away, and even though our helmsman often killed the engine (maneuvering the boat with a wooden pole instead), starting it again made even more noise and flushed all birds from the surrounding areas.  An electric boat would be ideal, although it isn’t at present a locally available option, unless you bring your own. Kayaks or canoes would also be great choices to visit the area with minimal disturbance to the birds.

As we prepared to make our way back we noticed a solitary Greater Flamingo (Phoenicopterus ruber), off in the distance. Flamingos are a popular attraction for all visitors to Isla Arena, but they do not remain in the area throughout the year and it was obvious that the flock had already moved elsewhere during our visit. Naturally our curiosity was piqued at the sight of this single specimen. Getting closer, we quickly understood why it had been left behind: the bird’s right leg was badly injured, hanging limp, its flesh mostly rotten. Not the prettiest sight, but I include an image here to bring an idea to the fore: we sometimes take for granted the natural processes birds go through and fail to realize that, very much like humans, they live unique, challenging lives, and don’t always come out ahead. This particular specimen seemed doomed to a certain death. 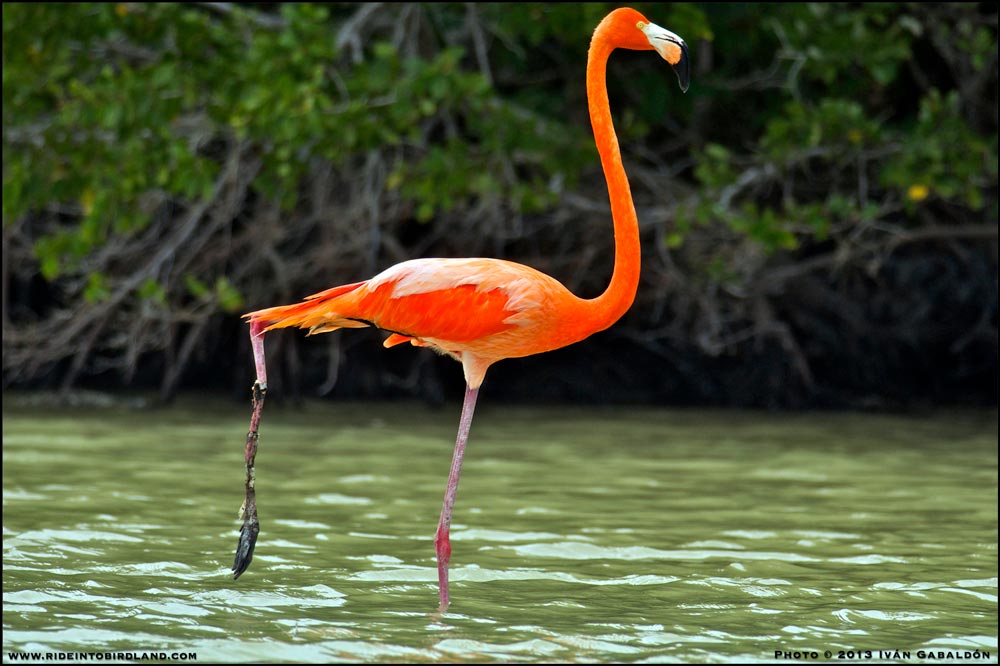 A little saddened by the sight of the hurt Flamingo, we started back toward our launching spot at the docks of Isla Arena. The sun was really high and shining bright by now. The few other boats we saw were all local fishermen making their way back shore, their nets tucked away. But there were still quite a few birds to see! 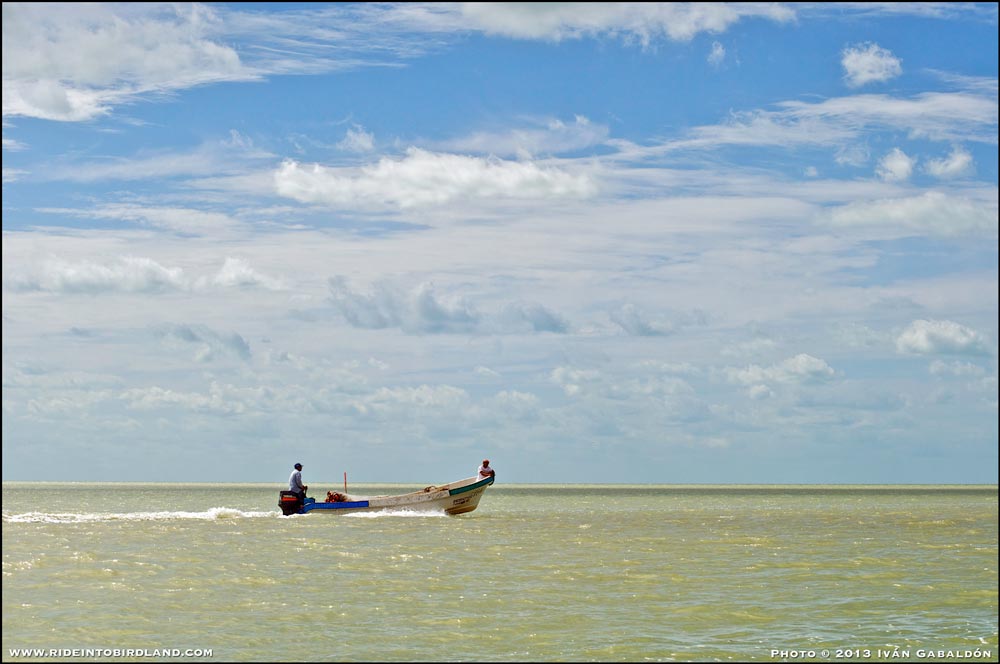 Isla Arena has a population of some 1,300 people, of which approximately 500 fish for a living. (Photo © Ivan Gabaldon). 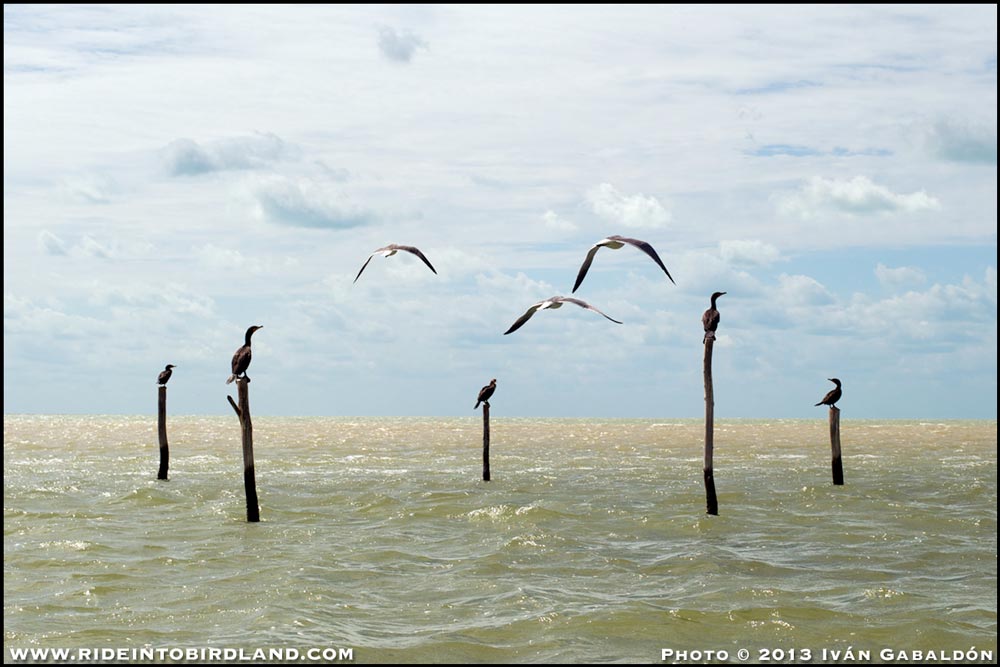 I knew it when I saw it: five Double-crested Cormorants, perched on wooden posts protruding from the water, in combination with the flight of a trio of Gulls, provided a “one-of-a-kind” moment for photographic composition. (Photo © Ivan Gabaldon).

As we passed the first docks, birds took off in great numbers: pelicans, gulls, terns and cormorants, their quick getaway providing me with a rare opportunity to use a lens that I love but is rarely used for bird photography: the Nikkor AF 50mm f/1.4. 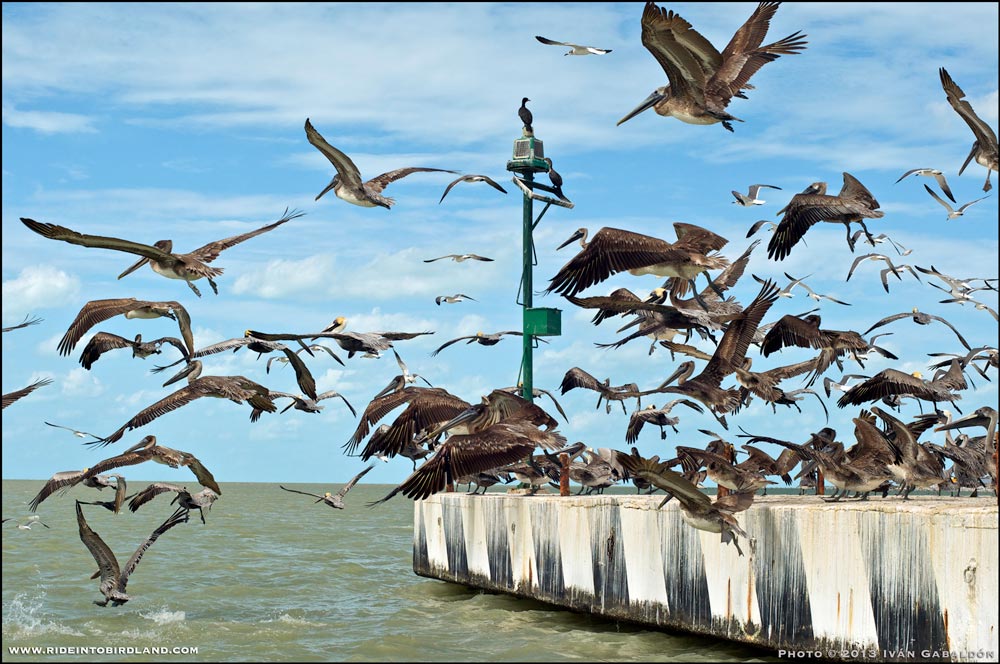 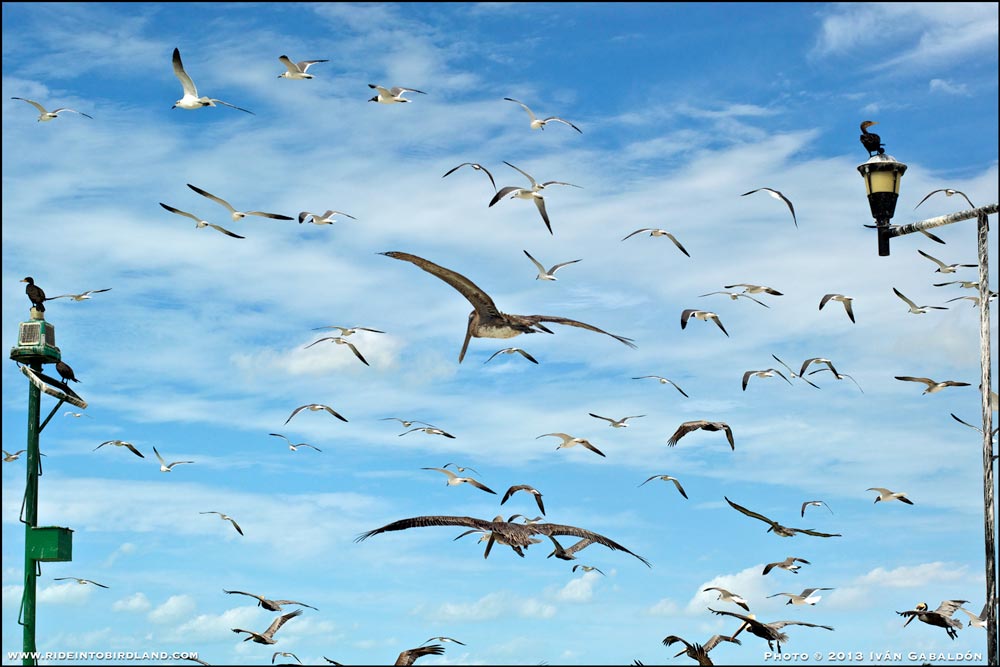 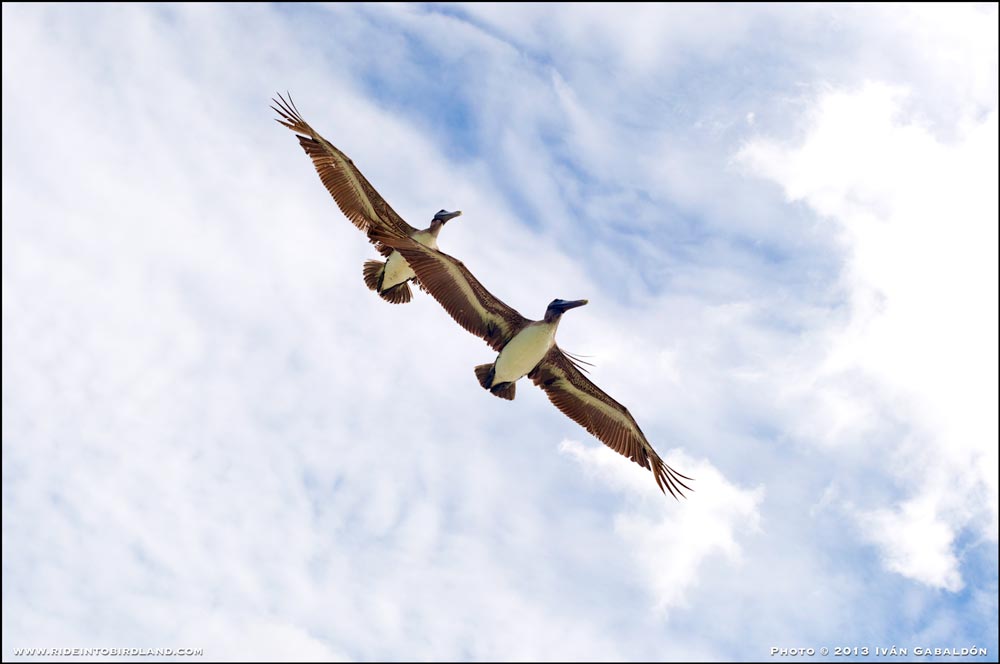 Any jet-fighter pilots out there? I can see you turning green with envy! (Photo © Ivan Gabaldon).

We finally made it ashore, but our experiences for the day weren’t over yet: we were poised to discover an interesting local spot with a Maya name, Wotoch Aayin, which means “House of Crocodiles”. A local family has worked hard to develop a very successful crocodile farming project, and to our great pleasure, they also serve the most delicious shrimp. I’ll tell you all about it in the third and final leg of our Amazing Campeche Trip Report, coming up soon.